All lore is owned by © Origami Orange Ltd and protected by copyright. 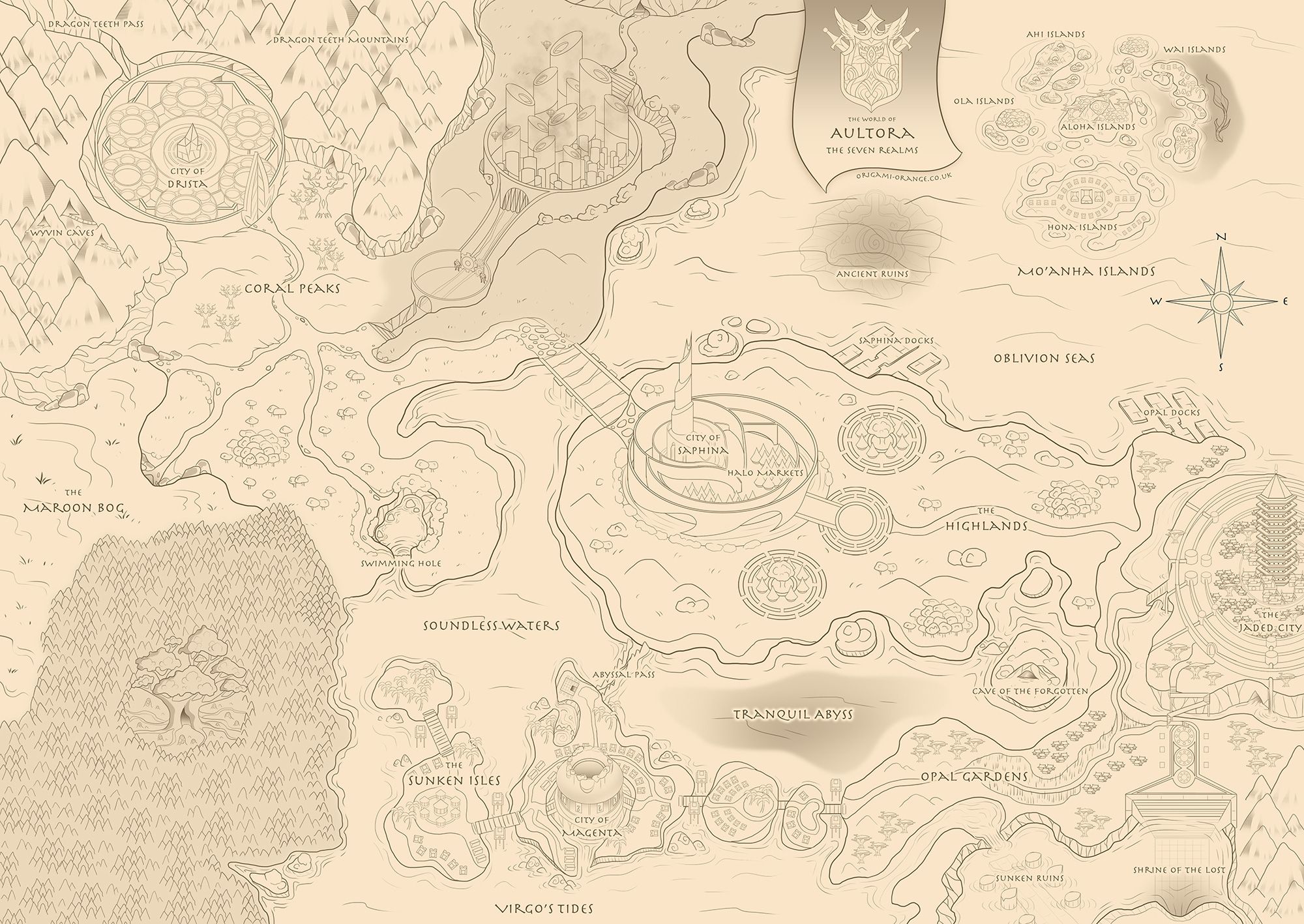 Drista is a large city built at the southern end of the Dragon Teeth Pass, the majority of its population is Valkte, and the origin to their society. Its buildings consist of ice, Crysallis and hardened snow, surrounded in a high wall protecting the many districts the city is made up of.

Travellers who want to make it past the Mountain ridge of Dragon Teeth, have to go through the pass the Valkte protect with their city, guiding travellers through the ridge to the other side safely.

The Coral Peeks is made up of mostly snow-covered terrains with trees that remain asleep and are crystalised in ice and snow.

When a Wyvin is discovered, the Kamina send them to live in isolation somewhere in their realm.

Saphina is the capital of the Highlands, Realm of the Kamina - a large and luxurious city known for its most prominent feature, ‘The Halo’; one long circuit, rich with traders and merchants from far-flung corners of Aultora; selling exotic and rare goods.

The Jaded City named such after the Jade Royal family whose descendants were the first to break their chains as slaves to the Voma and gave them freedom to live their own lives.

Shrine of The Lost

The Shrine of The Lost is home to the Ancestral Tree; magnificent veins of shining Ethereal branching up from a rune stone. This tree is the essence of their connection to the Spirit world.

The Opal Gardens Realm, home to The Jaded City and where the Rawkken inhabit and is a constant land of war between the Rawkken and the Voma for rights over it's land.

The capital of the Voma’s Sunken Isles is a small but glorious city to behold, dazzled with the finery they crave, it’s lush with crystal clear waters, and a popular plant is known as ‘Vita'harl’ also known as ‘Vit-Dew’.

When the Voma retreated to the islands, the Seer Stone washed away into the Virgo Tides, but was recovered and hangs in the city's ‘Crystal Palace’.

The Isles in which the Voma dwell after being run out of the Opal Gardens.

A place citizens of Aultora retreat to for a relaxing soak and good company.

The Highlands are vast plains, dotted with lakes and mountainous hills - the city of Saphina is built in the centre, surrounded by towns, hamlets, and farming lands where most of the city’s produce is supplied from.

Cave of The Forgotten

An old cave that left alone due to rumours of it being a burial ground for the fallen that put an end to the Ancients Reign.

Aloha islands are a sacred and old land used for certain sacred occasions. Ruins lay scattered across the island, where the Dralic believe the ancients once reigned from - The Void Spire.

Ola islands consist of rich soil that grows the rarest and potent plant-life out of all the Mo’anha islands. Their lands are small and separated by the Ahi territory but are vast with vegetation and large trees that make up their expansive rainforests - inhabited by plenty of creatures to hunt as food, or train as familiars.

Ahi islands are rich in exotic metals and intensely hot - dotted with active volcanoes that never sleep, the villages are constructed on the smaller islands with a stretch of water protects them from overflowing lava.

Hona islands are larger than any other clan island of Mo’anha. Thick clay and stone make up their island and help support the network of tunnels created to connect the Mo’anha islands.