No one knows how the Crysallis was formed or where it came from, but it was first discovered by the Valkte, consuming their primitive forms and giving them new life. 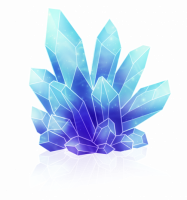 The Crystal is barely distinguishable from the ice that it grows within, which would explain it’s obscure existence. In the Valkte’s earlier scrolls, they talk about how the Crysallis embedded itself in their flesh and speaks to them, not with words, but depicting understanding in their minds, communicating through the fine tendrils that stretch out throughout their bodies.

The shards that protrude from the Valkte’s bodies, glow with a soft blue and appear frosted - it creates an aura of frost that coats their fur, mostly around the tips of their tails, horns and shoulders.

The Crysallis has been known to change colour depending on the nature of the Valkte. For example, when in their Bloodlust form, if they consume an excessive amount of flesh, their Crysallis will turn red and their forms changed into a deep red shadowy creature - a Crimson Stalker.

The Valkte are able to manipulate certain elements of snow, ice and wind through the embedded Crysallis in their flesh - it also grants them the ability to harness and forge the crystal into weapons, armour, jewellery and other objects.

Voice of the Crysallis

The Valkte don’t remember much about how they came to be - only that they were mere wisps of creatures before they were chosen by the Crysallis. Even now they can hear the voices of their creators - guiding them - it’s unknown as to what their true motives are.

An ancient page of text remains in the Valkte Archives, that is believed to be a record of the first Valkte’s experience after given new shape when the Crysallis clung to their being.

Silence; is bittersweet - a pool of stillness, so cold it numbs our body to pure insentience.

Only when the ripples crack do our pupils dilate - white noise hums beneath our skull, our chest bloats with sickly stale air.

Water, twists and bends around our body; cradled in a womb of frozen time - unsure if our life is ending or beginning.

Before existence reinserts itself; foreign flesh grasps at the exposed plains of our body, fire on ice, the sensation thaws - blanketing our mind with a sudden sense that you might be in pain.

A piercing crunch forces our body to buckle, making the ripples warp; a familiar memory abuses our mind - teeth. The world tilts and sways, ivory fingers reach from the pool of abyss that encases us; grasping at the thing that clings.

Hot, rotting air rolls past snarling lips; slowly things start to become natural, rather than rip, we cling, limbs weaved in slick pelt. We’re not sure why but torn bark resembles the sound, an old jaw creaking open and an unknown warmth trickles over our frozen fur.

Rows of pearled thorns slice up through a thick river of crimson tumbling over a long tongue - blood. Relief bubbles within us, our ribs loosening; the tight cage that held our breath hostage for an eternity.

“We are one…” Words unspoken echo behind our eyes, thin tendrils of an unknown sentiment squeeze our heart.

“We are one…” A body of splintering fur embraces us, the passion shattering our sweet, sweet silence.

Our eyes remain closed; for a single moment, we knew.