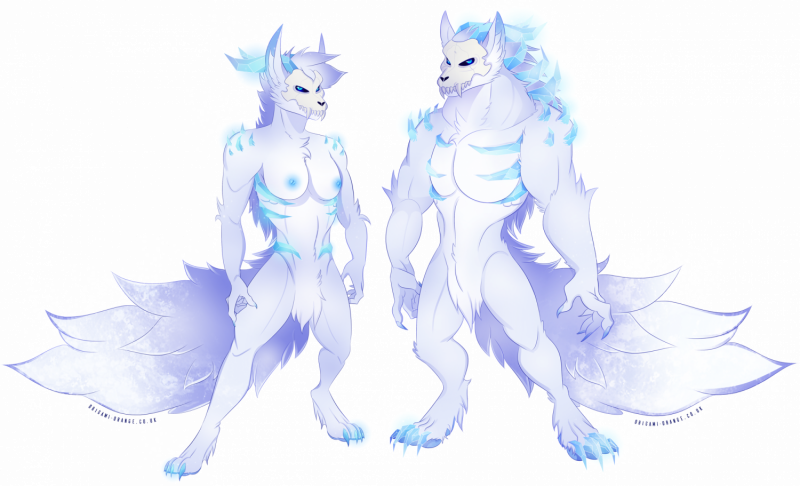 During the time they’ve been cursed, the Valkte have managed to control the Bloodlust to a point where they no longer attack innocent wanderers in the Mountain pass - and instead hunt either animals and beasts to sate their hunger or for food and materials.

After taming their savage minds, they’re aware of what they’re doing, seeing and hearing in this form, however, there are those that prefer the Bloodlust, never wanting the hunt to end, they continue to feast on blood never returning to their anthro forms; the Valkte call them, Crimson Stalkers.

Once the hunger is sated, it takes all their training and willpower to return to their Anthro form.

Centuries ago, the Valkte were cursed for becoming greedy with the Crysallis’ power and knowledge - forcing them to feel a desperate hunger for flesh which twists their bodies into an almost feral form. Their bodies grow in size, more shards protrude from their shoulders, chest and neck - even their claws elongate into terrifying shards of Crystal.

The Blood Hunt is a certain time of the month where the Valkte take turns to split into packs and hunt as one in their Bloodlust form to sate the hunger for longer periods of time. However, instead of hunting poor lost souls in the mountain pass, they hunt animals and beasts.

Whilst the Valkte have dedicated centuries to taming their hunger and abilities, the Blood Hunt is a sure-fire-way to sate the cursed hunger for a longer period of time, they don’t use tools or weapons in this form, their bodies were built to hunt.

The Blood Hunt usually takes place at night, when it’s less likely for wanderers to come across them during their feeding, and when the many savage beasts come out and crawl along the Dragon Teeth Mountains.

The Bloodlust form appears in Valkte when they reach as young as 5 years old, meaning even pups join their elders on the hunt so they can be taught to tame their hunger from a young age.

Pregnant females usually have to hunt for longer periods of time, because they need to feed for two - these females are usually accompanied by a larger pack, so they can help them control their hunger should they get out of hand.

Valkte don't just feed on Blood, they devour the flesh leaving nothing but bones.

For the Valkte that travel far into the different realms outside of Drista - an object called a Blood Shard can either be attained via trade or forged by a Valkte. They’re small, hollow shards of Crysallis that have been filled with the blood of an animal or beast used as a short term solution to subdue a Valkte’s Hunger on a daily basis.

Whilst the shards are common among their kind within large societies like the Drista city, they can also be purchased in trade across different realms or travelling Valkte. The shard contains enough blood to subdue a Valkte’s cursed hunger for a day - making it a short term solution. Valkte females who carry pups also use these shards if they’re unable to hunt during certain stages of pregnancy. As well as injured or sick Valkte that are unable to hunt, are given the shards to subdue their hunger during the time they need to heal.

Whilst the Valkte feast on not just the blood but the flesh too - carrying Blood Shards is much more convinient then carrying hefty portains of flesh.