The Dralic Clans are not so much ruled as they are, protected and guided by an Empress Hina and an Emperor Rhex. The two are eternally reincarnating spirits, that swell with the purest bloodline from the very beginning of the Dralic kind - and the very end of The Ancients.

Join our discord server
THE

Because of their old blood, they’re capable of abilities from birth that reflect the legends of their predecessors - their ability to transform into terrifying creatures of immense size and power, and their natural endowment to harness all elemental energies.

Whilst both the Empress and Emperor share these powers, they also each have a significant strength... 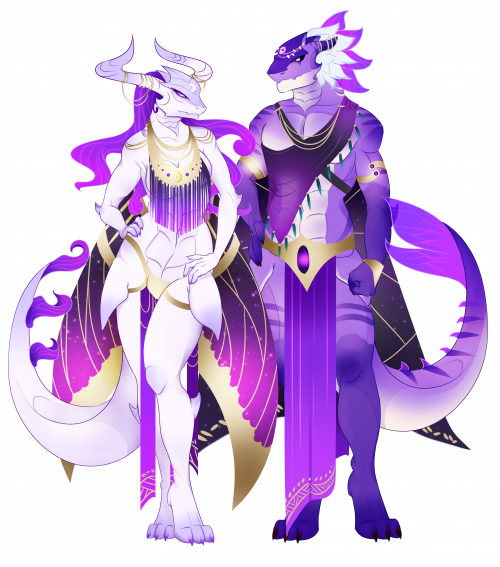 These talents were believed to be the result of the ‘Roots of Annihilation’ spell, supposedly cast to end The Ancients Reign and begin the Dralic’s existence.

Empress, Hina - has eyes of the past, present and future, able to see tunnels and paths from before, to the now and towards the far future. This ability helps guide the Dralic clans in their hour of need - usually only for the good of the Dralic culture, not for any individual or herself.

Emperor Rhex, has the significant ability to set-free, guide and trap a soul; this complex talent allows Rhex to help free souls from Dralic on their deathbed, guide them to the ‘Abyss’ - known as their afterlife; and also trap souls in Obsidian orbs.

The Emperor and Empress, do not live among the Dralic clans during their thousand-year existence - they stay in their beast form, circling the Mo’anha islands - so far up, you can barely make out their shapes against the vast skies.

However, they have known to land on occasion when their help is required, whilst this has only happened on a very few occasions since their eternal existence; they’ve been described as majestic in their Dralic form.

Within the tops of their carved staffs, an Obsidian orb floats in the curve of the crescent moon and within the centre of the sun - said to hold the soul of the Kamina and Ancient from the ‘Tale of Aku'ha’; the beings that began the existence of the Dralic and ended the Ancients reign.

The Empress and Emperor, live for one thousand years - after which, they land in their dragon form on the Aloha Island; within an open temple, laying in each other’s embrace until their bodies are consumed by black flames and turn to dust.

This is known as The Ritual of Rebirth. During this time, Dralic from all clans gather at the temple where the Emperor and Empress lie in their final hours and light a purple flame.

The Island is filled with a purple light that could be seen from the beyond - the Dralic Clan members stay on the Island until their Guardians finally die and disintegrate into dust. After which, they wait in silence, as two youngling Guardians rise from the dust. So the cycle continues.

During the time when the Emperor and Empress are only younglings, the elders that Dwell on the Aloha island raise and care of them until they are able to fly back up into the sky - forever circling each other, watching over their people, until the day they die.

Making them both sacred, treasured and precious beings of the Dralic Culture.